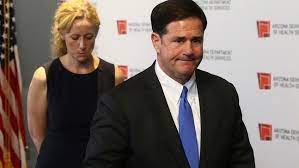 Read the Letter from the Treasury Department to Ducey

Just when you thought you’d seen the limits of the governor’s poor decision-making, he goes a step further. Back in August, he went so far as to misuse federal funds to provide financial incentives for K-12 schools to ignore CDC COVID mitigation recommendations. In a second Executive Order, he offered $7K per pupil in federal money to families that live in districts following CDC mitigation measures.

In that E.O. the governor offers to increase per pupil funding by $1,800 per year for schools that ignore CDC mitigation measures (universal masking).

Now on to the scheme where parents get $7,000 ‘cash on the barrelhead’ if they live in a district that is following CDC mitigation measures and they don’t want to send their kid there because of that.

Fortunately, the U.S Department of Treasury has been keeping a close eye on Governors that are misusing federal funds, including Governor Ducey. Today, the Treasury Department sent Doug Ducey a letter telling him that spending federal COVID relief funds for things that discourage compliance with evidence-based solutions for stopping the spread of COVID-19 is not permissible. The letter closes by demanding that the Governor “… describe how the State will “remediate the issues identified with the two programs”.

Here is an excerpt from the sternly worded admonishment letter:

The purpose of the SLFRF funds is to mitigate the fiscal effects stemming from the COVID-19 ‘public health emergency, including by supporting efforts to stop the spread of the virus.5 A program or service that imposes conditions on participation or acceptance of the service that would undermine efforts to stop the spreadofCOVID-19 or discourage compliance with evidence-based solutions for stopping the spread ofCOVID-19 is not a permissible use of SLERF funds.

Accordingly, Treasury requests that the State of Arizona provide a response describing how the State will remediate the issues identified with the two programs described above. Please submit your response to Jacob Leibenluft, Chief Recovery Officer at the Treasury Department, within 30 business days of receipt of this letter.

Failure to respond or remediate may result in administrative or other action, including as provided under Treasury’s Interim Final Rule.”

In characteristic fashion, Governor Ducey dismissed the US Treasury Department’s demand that he remediate his harmful practice of bribing schools not to require universal classroom masking. His short statement back to Treasury was that he will not be responding to the letter, telling Treasury to take him to “court”.

That sounds silly, considering that all federal grants come with certain conditions, conditions that Governor Ducey has broken. Remedies for failure to comply with the terms and conditions of grants are usually administrative sanctions rather than legal ones.

In other words, since the federal government is a large distributor of funding to Arizona, a usual administrative remedy would be for the federal government to withhold additional federal funding until the state demonstrates that it will stay in compliance with future terms and conditions by remediating his past non-compliance.

On Friday, Yana Kunichoff from the Arizona Republic disclosed which Arizona schools received funds under the governor’s program that is now under federal scrutiny. More than $109 million in federal COVID-19 relief funds has been allocated to 98 school districts and charter schools under that program, which was only available to districts without mask mandates.

You can search for which charter school chains and school districts received the cash in Yana’s article: School funding: Which schools got money from Ducey’s COVID-19 program? One thing that you’ll notice right away is the enormous amount of money that went to charter schools, especially the BASIS Charter Schools and others like it.