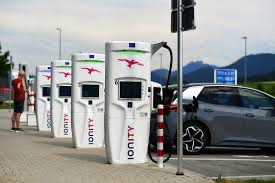 It Depends on ADOT’s Leadership Team

The Infrastructure Investment and Jobs Act (IIJA) – (aka the Bipartisan Infrastructure Bill) has $5 billion in funding for states to add electric vehicle charging stations (in a funding formula) and an additional $2.5B in competitive grants. Because ‘range anxiety’ is a big consumer barrier for buying an electric car, the state funding formula focuses on adding charging stations to the interstate highway system in the initial years.

Arizona’s formula funding for the next 5 years totals $76.5M, with $11.3M in year one (2022). To get the federal funds states need to contribute 20% toward the program- which can come from state government, from the private sector, or via a public/private partnership.

There’s a long list of potential partners or sponsors to contribute that 20% including Nikola Corp., Lucid Motors, LG Energy Solutions, Tesla, APS, SRP, or Tucson Electric Power. Because ADOT has administrative control of the rest areas, they should be able to provide incentives or deals attractive for private or public/private partners to chip in for the 20% match.

Each charging station costs about $100K including the administrative costs…  meaning Arizona’s allotment of $11M in 2022 should be enough to put up 110 or so charging stations. With 16 interstate & state highway rest areas in Arizona (some busier than others – Sunset Point being the busiest) there’s sufficient funding in 2022 to put an average of 4 stations per rest stop this year (although it probably makes sense to do more than 4 at the busiest rest stops and fewer at the quainter ones).

To get the finding for the charging stations, ADOT needs to submit an EV infrastructure deployment plan to the Joint Office of Energy and Transportation by August 1, 2022. The decision rests with ADOT, but their plan will be informed by the Arizona State Transportation Board.

I called into and provided written comments to the AZ Transportation Board public meeting last Friday urging them to charge ADOT with finding a workable plan that places the stations in convenient places (at rest areas) while providing incentives for private sector participation for the match (e.g., Nikola, Lucid, Tesla, APS, SRP, TEP etc.). The main call to action was to get ADOT to include electric vehicle charging stations in their 5-year plan. At this point, the ADOT 5-year plan doesn’t even mention electric vehicle charging.

In looking at public comments that have been made by Board members, we discovered that they are skeptical of participating even though the feds pay for 80% of the costs.

But does that resistance make sense? No!  As one of our Board Members, Mac McCullough (a health economist), explains here…  there are many rational reasons why the government should invest in emerging markets especially when their products have tangible public health benefits. From Dr. McCullough:

Time will tell if ADOT puts in a plan. If they don’t, the program goes for another 5 years – and the next administration can participate. Elections matter!