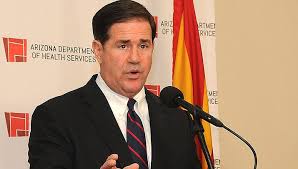 There are a number of important public comments in the record documenting the Ducey Administration’s slipshod implementation of worker safety regulations in Arizona. Below is among the most informative of the comments:

Establishing and adopting occupational safety and health standards is fundamental to OSHA enforcement. Enforcement of such standards is the keystone to protecting employees from exposure to hazards shown by research and experience to be harmful to employees.

As established by Congress in the 1970 OSH Act, states are allowed to form an OSHA-approved state plan provided they develop and enforce standards that are “at least as effective” as those established by OSHA. Adopting OSHA safety and health standards, when they apply, is not optional and must be completed in 6 months.

As indicated by OSHA, the Industrial Commission of Arizona (ICA) failed to adopt in a timely manner, or even at all, several major OSHA standards and compliance directives.

When the ICA fails, or delays, to adopt new safety standards and directives as required, workers under its jurisdiction are denied protections afforded by Congress. In the case of OSHA’s silica standard, the ICA adopted it some 27 months after OSHA was already enforcing it in states under Federal OSHA.

Simply, ADOSH cannot enforce standards before and until the ICA adopts them. To claim that ADOSH is at least as effective as OSHA when it has not adopted or created equal or better occupational safety and health standards to enforce is preposterous.

The obvious conclusion: Arizona State leadership has failed to fully protect Arizona workers as required. Revocation of final approval and reinstatement of Federal concurrent authority in Arizona is warranted. Concurrent enforcement should remain in place until such time as State leadership clearly demonstrates the will to correct its deficiencies and maintain performance of at least the most fundamental requirements.

The fact that such action is warranted at all is a travesty. Retaining exclusive local jurisdiction over occupational safety & health enforcement provides several advantages to Arizona in terms of service and responsiveness. The privilege should have been better safeguarded by State leadership.

The State leadership’s performance in the issues discussed demonstrates a low regard for the rights of Arizona workers as guaranteed by Congress. It also reflects disdain for Arizona lawmakers who previously worked to establish the State Plan and maintain the privilege. Regardless, Arizona’s performance in enforcing occupational safety and health is unacceptable and must be immediately corrected if the Act is to mean anything at all.

Here are some additional substantive comments in the public record. Here are some anonymous comments from likely ADOSH insiders: https://www.regulations.gov/comment/OSHA-2021-0012-0225 and documentation of inadequate staffing and mismanagement by the ICA of the OSHA grant: https://www.regulations.gov/comment/OSHA-2021-0012-0229