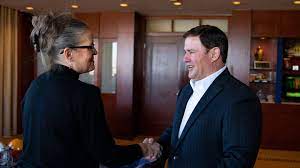 The Governor is just one person. There are 32,000 people working in various capacities in state government. So how is it that just one person, the governor, can impact the work culture and morale of 32,000 employees? It’s all about leverage.

The governor is the most powerful person in the state. She or he has enormous statutory authority and can hire or fire just about any state employee (virtually all state employees are ‘at will’ these days – meaning they can be fired for no reason at all).

Governors seldom reach deep down into agencies and fire and replace people…  but it’s common for governors to replace agency heads, deputies, legislative affairs people and communication directors (especially at the beginning of an administration). It’s also customary for the governor to make wholesale changes in governor’s office personnel.

So how does all that statutory authority including the authority to change agency directors and their deputies change the work culture of state government?

Perhaps the biggest thing is that agency directors set the tone for workplace behavior, agency priorities, flexible work schedules, whether to allow programs to hire folks, selects the deputy and assistant directors to carry out her or his wishes, gives the programs green, yellow, or red lights to apply for grants, and makes decisions about administrative rulemakings.

Agency director management style can influence culture in more subtle & insidious ways. For example, appointed directors can stifle innovation and harm morale by instructing staff to clear all decisions with them before proceeding. Even worse, appointees may tell staff to halt action until he or she “hears back from the governor’s office“…  resulting in long delays or even a complete lack of progress.

When there’s a change in the governor, as there will be in about 30 days, it’s a real opportunity for cultural change.

Many persons that work in various sectors of public health in private, nonprofit, or among other levels of government will be looking forward to potential changes in the coming work environment and may be attracted to serve in the new administration if they believe the incoming governor better appreciates the importance of evidence-based public health practice and improves morale by creating a healthier agency culture.

Some folks who might not have considered working for the ADHS over the last few years might be willing to give the agency a 2nd look in the coming months. I expect interest in (and competition for) positions at ADHS to pick up once the governor is sworn in and new leadership is selected. Why not get in on the ground floor?

On one hand, it’s a shame that there are nearly 100 open positions at ADHS these days, but on the other hand – those vacant positions represent opportunities for folks to join the new team early in the administration.

You get the idea…  there are many open positions that many of you may be interested in exploring in anticipation of the cultural changes that’ll be coming to state government in the coming months. Now is a good time to explore the possibilities.

AzPHA Has a Long History of Supporting Reproductive Freedom