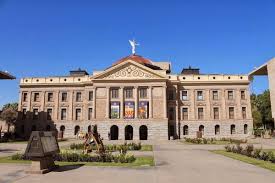 The highlight last week at the state legislature was an attempt to get the budget negotiations started by trying to pass a ‘skinny budget’ – which is basically a carbon copy of last year’s budget with some tweaks for enrollment in state programs and population growth.

A series of about a dozen ‘skinny’ budget bills were brought up for votes in the House Appropriations Committee by Chair Regina Cobb. The pitch made by the chair to the committee was that the skinny budget would pass and then members, including Democrats, could propose floor amendments.

The drama wasn’t very long-lasting because the first bill failed 7-6 with Rep. Udall and Hoffman voting no with all the Democrats (for different reasons). The drama left the room as bill after bill met the same fate- losing 7-6. If there are other strategies for the upcoming week- I don’t know what they are.

Last Monday, the Senate have final approval to two bad bills that have been sent to the goveronr for his rubber stamp. The most harmful is HB2616 which permanently takes universal masking away as a public health intervention in classrooms.

It’s roundabout way says schools can’t require kids to wear masks ‘without the express consent of the parent‘, nullifying the intervention because classroom masking only works when it’s universal (basic masks are good at stopping particles from leaving mouths and noses but they’re poor filters except for N95’s and equivalent).

HB2498 stops cities/counties from ever requiring a COVID vaccine for staff. This one is less harmful than HB2616 in that it’s limited in scope and only applies to the COVID-19 vaccines.

TAPI has a campaign and send Dr. England’s letter to both Governor Ducey and Dr. Carmona at AZDHS urging a veto: https://whyimmunize.salsalabs.org/TelltheGovernortoVetoHB2498

I expect the governor to enthusiastically sign both this upcoming week.

Several other bad bills are poised for floor votes this upcoming week. No agendas have been posted yet- so I’ll spare you any details right now- but stay tuned to my blog and Policy Committee action alerts as things can happen.

Among the bills I expect to see action are SB 1009, which greatly restricts the public health emergency authority that future governors have. While our current governor under-used and at times mis-used that authority to harm the COVID response, I’m hopeful that we will never again have a governor that will as brazenly misuse emergency authority the way this one has- and so it would be nice to keep the authority in tact.

See our April 18, 2022 Legislative Roundup for the list of bills we’re following. Here is this week’s Spreadsheet Tracker